Changes in society invariably lead to feelings of discomfort, tensions and social unrest, also in our present time. Media, and social media in particular, quickly and effectively make such feelings publicly visible and therefore have a magnifying effect on the sentiments in society: tweeting your opinion is a piece of cake, just like reacting to opinions, but a dialogue will not easily get started and polarization is imminent.

The project has a duration of two years, starts April 1, 2019, and is co-funded with a research grant from SIA (RAAK-Publiek). The project team consists of ca. 30 professionals from the participating organisations, a mix of researchers, designers, and professionals in the involved metropolitan neighbourhoods.

Various metropolitan neighbourhoods manifest, for a long time already, tensions between citizens and between citizens and professionals and municipal officials in the neighbourhood. Frequent incidents point out discomposure, disgruntlement, and polarisation. Inhabitants experience problems due to differences in values and opinions about the design and use of public space and co-inhabiting the neighbourhood; these tensions sometimes lead to violent behaviour and undisguised racism. Relationships with public organisations get strained and ruled by sentiments of mistrust. The result is that citizens feel a distance to authorities and communication is weakened even further.

These tense relationships often have a background in public values and public dialogues about values. It appears to be difficult, when there are feelings of unrest and uncertainty, to look beyond one’s own values and interests and to participate respectfully in a public dialogue about shared interests and public values. Municipalities, and neighbourhood managers in particular, struggle with increasing manifestations of polarisation.

A public dialogue requires specific social skills, from both citizens and professionals. In this project, departing from a knowledge base in philosophy, a methodology is created and tested that empowers neighbourhood managers to lead people in a dignified public dialogue, both in local conversations and on social media, through special attention for – and development of – dialogue skills. We do this in four work packages:

The municipality of The Hague is planning the installation of a smart city infrastructure in Scheveningen. In this research project we collaborated with the municipality and local entrepreneurs to conceptualise new services that make use of this outdoor infrastructure and artificial intelligence. The project was financially supported with a SIA KIEM grant.

This research project was flanked by numerous student projects that yielded both research results and design concepts. 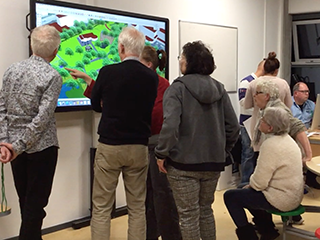 For the revamp of a local park, the municipality of The Hague invited local residents to participate in its design. This process was supported with VR technology. Our research aimed to measure the effectiveness of the technology and this participatory design approach to increase citizen engagement. 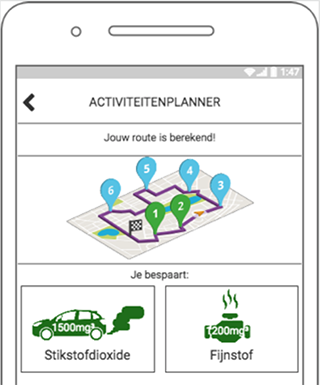 How do we make motorists more aware of the consequences of vehicle emission? Naming and shaming, or empowerment to change? This project aimed to find the best approach for individual needs. 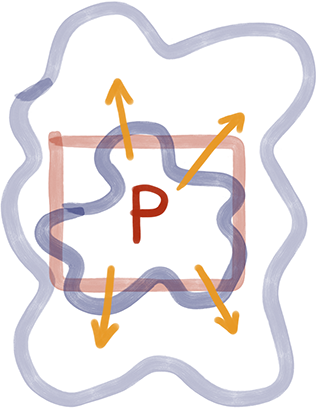 This project aimed at developing methodology for theme investigation, which is a key activity in reframing complex problems in processes of design thinking. The project involved a long-term study of over 10 case studies, in the domain of social design, in which the research team engaged in co-design with stakeholders to reframe complex problems in order to find novel solutions. The research has identified best practices and resulted in a set of tools to support theme investigation. 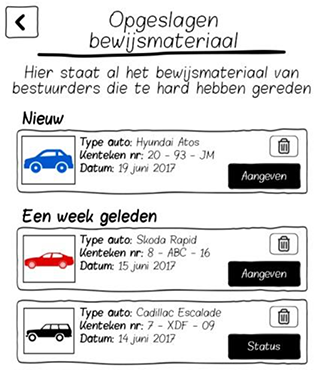 This project is about citizen empowerment: giving citizens a tool to measure speeding traffic in their street. The objective is not to take over policing tasks, but to gather evidence that action is needed.

Current social media are designed around timelines: they present discussion in chronological order only. This project aimed to design alternative ways to present posts on social media that can improve the quality of discussions.

With the introduction of email, sending messages and letters has nog only become easier, but also faster. In general, we experience this as an optimisation and improvement of the physical letters we used to send. yet, sending mail on paper, in an envelope, certainly had its charm that we rarely experience any longer. This project is a search for new forms of communication that function with modern technology but retain the type of charm that hand-written paper post possessed. It appears to be difficult to let go of existing metaphors and known forms of interaction.

A concept for a modern slow mail service was created by Tim Davids.

Finding a parking garage is easy with today’s car navigation systems, but finding a parking lot in the street is a challenge. This project explores the required technology and the optimal interface design for a mobile app that helps you find a free spot to park. 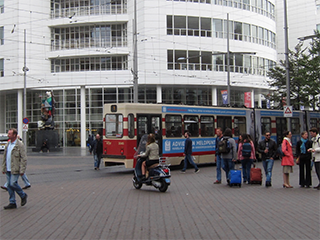 The main crossing in the centre of The Hague is characterised by a lack of traffic rules, with public transport, taxis and bikes passing through the crowd of pedestrians. This project took a leap forward and conceptualised how autonomous public transport, without drivers, can communicate its intentions to pedestrians.

Message on the Spot 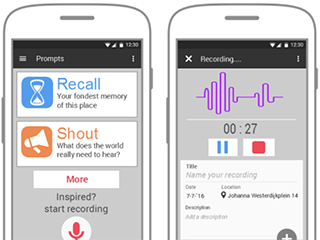 Current technology offers opportunities to deploy location-awareness in mobile apps. This project explored a range of design concepts for services that aim to bring people together in novel ways, using location-awareness and cultural content to foster serendipity and chance encounters. 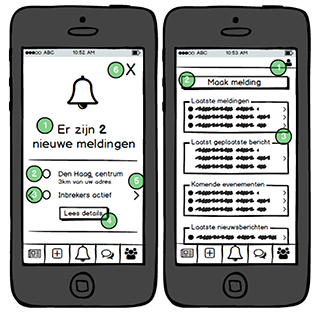 The app designed in this project allows citizens to map such issues, ranging from social incidents to required maintenance and desired changes. Both professionals and citizens can benefit from becoming aware of the issues at stake in a neighbourhood and discussing them publicly. 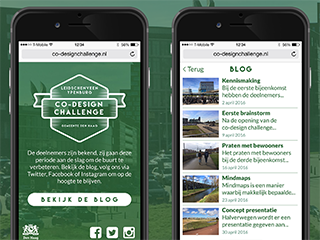 How can citizens be motivated to be more engaged and participate in developments of the public areas in their neighbourhood? This project created new service concepts for the municipality of The Hague to approach citizens that usually do not participate, in a motivating way.

Interactive Technology in the Social Life of Elderly 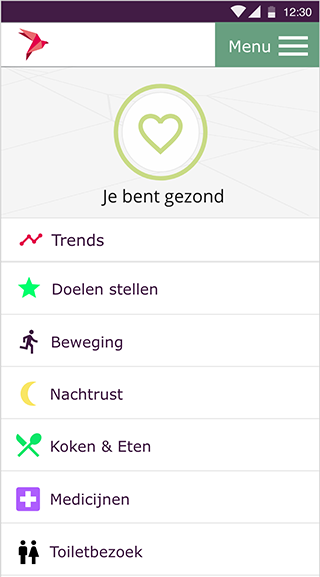 Elderly are often physically challenged and as a result socially limited. This project explored the social needs of elderly, e.g. in fighting loneliness, and the design requirements this imposes on communication tools that could support and alleviate them and their social circle. 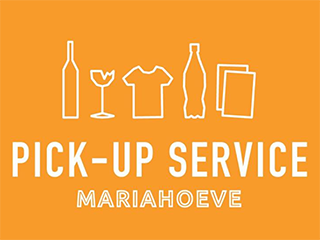 The Mariahoeve district of The Hague request the design of a new set of services to stimulate employment and increase social inclusion in its neighbourhood. In this project, students and researchers worked together with practitioners to conceptualise new services: Mariahoeve Storytelling Platform and Mariahoeve Pick-up Service. The latter service was conceptualised, implemented, and put in practice by Leonie Flin. 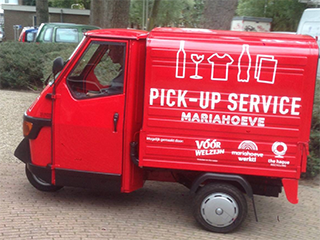 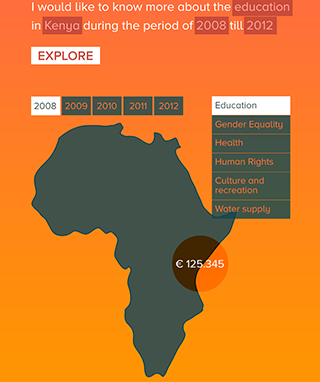 The Ministry of Foreign Affairs aims to publish financial data from IATI on aid programmes in correlation to data from the World Bank, to give insight into indicators of development (e.g. birth rates, death rates, epidemic spread, etc.) and therefore into the effectiveness of the aid programmes. This project explored the possible interfaces for an online platform for the support of policymakers, aid organisations, journalists, and politicians. 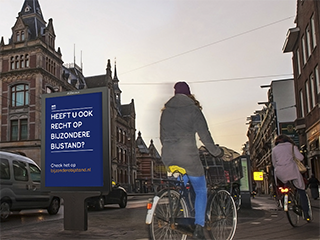 Applying for special welfare is often hard. Not just because it is difficult emotionally, but also because the process is cumbersome. This project, in collaboration with Centric, aimed to redesign that process and create better online solutions, to lower the thresholds. 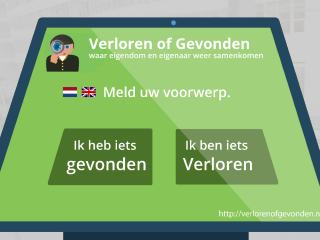 The municipality of The Hague commissioned this project to design a new online platform to reunite citizens with their lost properties that have been found, but are not yet retrieved. The new platform aims to reduce costs of storage and communication.